This is not your mother’s IUD 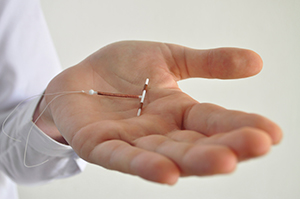 One of the most common reasons for a young woman to visit me at Oak Street Medical is because she has questions or is unhappy with her current birth control method.

When I provide her information about contraceptive options, I always include the intrauterine device (IUD). This is one of the safest, most effective and easiest methods for preventing pregnancy. But frequently, I hear this: “I don’t think I should use an IUD because my mother said they can cause a lot of problems.”

Why is this myth so prevalent?

About 40 years ago, an IUD called the Dalkon Shield was allowed on the market. It had design flaws and caused problems for some women who used it. The media coverage of these problems resulted in many women shying away from IUDs, even though good, alternative IUDs were available. Consequently, the popularity of the IUD in the United States fell sharply, while in Europe, their use steadily climbed. Today, it is one of the most popular methods among young, European women.

What exactly is an IUD?

An intrauterine device, or IUD, is a small T-shaped device that a medical provider places into the uterus. The procedure is quick and involves the placement of a small catheter that passes through the vagina. Thin strings on the end of the IUD, stay up inside the vagina and allow for easy removal.

What are the different types of IUDs?

There are two types of IUDs available in the United States. The Paragard releases copper, while the Mirena and Skyla release the hormone progestin.

Of these two types, the progestin-releasing IUDs are by far the most popular. Paragard can remain in the uterus up to ten years, Mirena five years and Skyla three years. We can help you decide which of these is best for you.

What changes will I notice if I use an IUD?

Most women who use the Mirena or Skyla IUDs have lighter, less painful periods than they had before the IUD. Some women stop getting their periods all together. This is not at all harmful, and many young women choose IUDs for this very reason. Regular periods will return when the IUD is removed.

What are the downsides to having an IUD?

Unlike condoms, an IUD does not protect you against infections that you can catch during intercourse. Any time you have a new partner, we always recommend that you have them use condoms to protect you against sexually transmitted diseases. This is a smart and safe sexual practice, even if you are using birth control pills or an IUD.

There is a small chance the IUD will come out during your period. If this happens, you will need a new IUD. We teach you how to check for your IUD strings to help ensure that it’s in place.

Your mother: a great source of advice, but maybe not on this topic

An IUD is one of the safest, most effective and easiest methods for preventing pregnancy. Both IUD options allow you to be worry-free about becoming pregnant for quite some time. And best of all, you do not have to remember to do anything or take any birth control medicines on a regular basis. How great is that?